Sitting by a lake before dawn, I saw the mist obscuring the horizon. The lake was like glass. Its stillness profound. There were no sounds of the birds, squirrels or other awakening creatures. The houses were dark and in shadow.

I felt that this morning captured for me where we are as women in religious life, as citizens in a polarized nation, and as people of faith. The future we face is shrouded in mist.

Apostolic religious life as we have known it faces an unknown future. We are like many of our foundresses and founders, who responded to the needs of their time without knowing the future of the work. Unlike them, we are living in a time when the theology and spirituality of a more traditional time has been transformed with the advent of science and the values of the modern period. The raison d’être of our lives is being transformed. We try to look beyond the aging of our communities, the lack of new members, and the closing of sponsored ministries, but the mist is clinging to the horizon.

We face a polarized electorate in our country. There is much talk about us moving away from democracy to more autocratic leaders. Similar shifts are happening in many democratic countries. There are many reasons for this. Two that stand out for me is the failure of globalism, and the racism and sexism that are embedded in many of our policies and structures of the modern era.

Globalism has failed to bring a level of economic security to everyone. In the U.S. and in most of the post-industrial word, wealth is disproportionately held by a small minority. This is becoming known and intolerable.

Second, there is a growing awareness of how many of the structures and policies put into place — to achieve the progress that has generated such wealth — systematically violated the rights and well-being of those who were not white, male, Christian or Western European.

The question at the horizon is whether democracy can achieve a new approach to transform a future to respond to and address the well-being of all of life, including our Earth home. As I try to see that possibility the mist continues to hold steady, limiting my vision.

Perhaps most painful is that as people of faith, religion has become an instrument of division and violence. The growth of Christian nationalism is frightening.

Much is being written about it, and I was struck by Herbert Kitschelt’s analysis of what is happening. He is a political scientist at Duke, and commented that there is no social organization in America that is as segregated as churches. His analysis described what is happening as the spread of a form of clerofascism. He writes that it advocates “a white evangelical oligarchy with repression — jail time, physical violence and death — inflicted on those who will not succumb to this oligarchy” and likens it to what prevailed in the South until the 1960s.

Although it seems extreme, one begins to see this approach emerging in the aftermath of the Supreme Court decision on Roe v. Wade. State legislatures are racing to enact punitive measures against women who are faced with challenging pregnancies. However, this is much larger than one ruling or one policy.

Kitschelt argues that those who espouse this worldview are fighting hard to return to more traditional structures of family and economic life. This is happening globally as “right-wing populists around the world draw on religion as their ultimate ideological defense, even if their religious doctrines are seemingly different,” citing Donald Trump, Vladimir Putin, Narendra Modi, Recep Tayyip Erdogan and Xi Jinping. 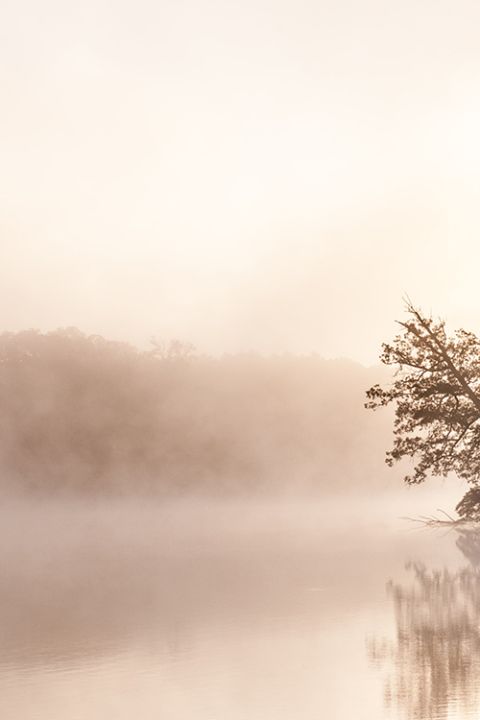 For those of us who believe the Gospel message is one of love, mercy, compassion, inclusivity and justice — and who also acknowledge that many of the values of the modern world and insights of science complement, transform and deepen our faith — it is hard to see where we are going as the mist thickens at the horizon.

As I sat waiting for dawn, the mist began to lift. Birds flew overhead flapping their wings. Squirrels began to chatter and frolic. Slowly, the sun began to rise and soon the mist rose and the houses around the lake were illuminated.

I was reminded of a quote I received from Benedictine Br. David Steindl-Rast, who gave my profession class our retreat before we took first vows. He gave each of us a quote: Mine was, “All we can do to make muddy water clear is to let it settle in silence.”

I don’t believe that means to be passive. I believe it means to trust. Trust that actively abandons one’s false self to the Divine Mystery working within. It is a trust that empowers. A trust that believes that if I create the spaciousness and listen to the depths of my being entering into Christ consciousness, I will know what to do, what to say and how to say it.

The future will not be veiled in mist but rather, knowing that what each of us does is part of evolving that future, we will become like the sun, the light that burns off the mist and illuminates a future more in keeping with the kindom of God.

The call is to deepen one’s contemplative practice. It is to trust in the words of Constance FitzGerald, a cloistered Carmelite, “Contemplation is not a validation of things as they are … but a constant questioning … [that] believes in the coming of a transformed vision of God … a new and integrating spirituality capable of creating a new politics and generating new social structures.”