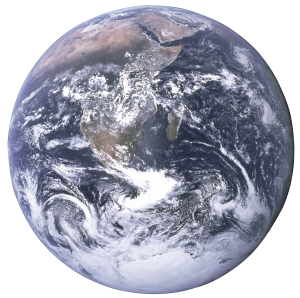 Societal Context
As we begin the 21st century we are becoming increasingly aware that we are in the midst of a significant shift in worldview.
For the past three hundred years, the Western world developed within the worldview primarily characterized by Newtonian physics. According to this physics, the material world is divisible into discrete parts that can be described in objective terms. Their interaction can be predicted and controlled. The scientist is distinct from what s/he observes. It is reductionist, determinist, and objective. Physics is the fundamental science. There is no room for other ways of knowing other than scientific observation. The philosophy of Rene Descartes supported such an understanding as the dualism in his thinking emphasized the role of reason and excluded subjective consciousness. Religion was displaced as a partner of science and became privatized. Dualistic thinking, either/or ways of approaching reality prevailed. Patriarchy continued within this worldview disproportionately valuing the male experience and perspective in world culture.

The physics that guided the Enlightenment provided a technological know-how rivaled by none in human history. The benefits and the costs have been experienced across geographical and national boundaries, albeit disproportionately. These scientific concepts have implications for every aspect of life although they take decades to be understood and embodied in institutions, systems, and ways of thinking. Today, we see their impact in globalization and the breakthroughs of telecommunication which increase the complexity and speed by which ideas, finance, commodities and personnel, traverse the globe. Today we also experience great disparity between rich and poor, increasing environmental destruction, unceasing violence, and the commoditization of all life forms. This has made many of us painfully aware of the suffering and devastation caused by this worldview embodied to the extreme and without any countervailing force.

However, with the discoveries of quantum physics, there is emerging a complementary _expression to Newtonian science. The new physics is not reductionist, determinist, or objectivist. The observer is not separate from what s/he observes. The whole system is not the sum of its parts but rather there are emergent properties that were not deducible from the parts alone. It reveals that existing entities have two levels of being—the actual and what they might become. And so rather than analyzing in either/or ways it has developed both/and or complementary concepts to describe such a phenomenon. Complementing quantum physics is the cosmology that has been enhanced by the discoveries of Edwin Hubble and subsequent use of the Hubble telescope. The universe is alive, expanding, involved in a dynamic process of change. Stars and the universe itself are born, live, and die. We see a universe that is interconnected and in process. No longer do we look at our world in atomistic ways but rather we see how integrated life is on the planet. We live in a web of relationships. We cannot totally explain everything and for some scientists the invitation is there for religion to again engage in the conversation.

Just as the new physics complements but also transforms classical physics, the implications of the new physics and cosmology also challenge and transform our conceptual frameworks with implications for how we think and live. The new physics both undergirds and finds resonant expressions in some of the social movements of the last fifty years. The feminist movement challenges patriarchy and heightens the need to incorporate values such as mutuality, cooperation, and right relationships into the way we operate in society. The ecological movement challenges us to think in terms of sustainability and the interconnections of living systems. The social responsibility movement challenges corporations to see the long-term consequences of their decisions and how they affect all aspects of a community. The renewed democracy movement reveals the importance of the individual and the community participating in the decisions that affect their lives. The insights coming out of these and other social movements and the breakthroughs in science are challenging our understanding of progress, an economics which maximizes profit with short term gains, a geo-political situation of competing nation-states, ethnocentric policies that do not reflect the interdependence of the global community, violence as the acceptable way to resolve conflicts and power structures that undermine the dignity and rights of the human person.

Such insights impact religious thought as well. In many cases, core religious values of respect for the dignity of all persons, for the earth, the interdependence of all, and responsibility for the common good are confirmed. But the new science and the breakthroughs in cosmology provide a new context within which we search for meaning. Within this context, we need to reflect and articulate anew how the universe began, the role of the human within it, and who God is. Both/and ways of thinking, as well as the dynamic process of change, challenge some of the more absolute claims of religious denominations. The growing awareness of ecological concerns and the new cosmology heighten the need to transform a predominantly anthropocentric perspective and moral ethic. Within this larger context, there is a religious resurgence occurring. People are searching for meaning and for spirituality. The removal of religion from the public debate may be ending. The question will be whether or not the current religions of the world will be able to engage the positive and emancipatory energies of the spiritual impulse within this new context and bring it to bear on the societal issues facing us.

Context of the Institute
It is within this larger context that this project is situated. The leaders who participate in these circles, predominately of US origin and Catholic tradition, have worked to effect significant change within ecclesial and societal arenas. They are rooted in the teachings of the Second Vatican Council, especially Gaudium et Spes, as well as the 1972 Bishop’s Synod statement on justice. This statement clearly proclaimed that action on behalf of justice and the transformation of the world are constitutive elements of the preaching of the Gospel. Such insights have continued to develop through the years inspiring the next generations.

Social justice activists and educators work to achieve a more just world in a variety of ways. Inspired by their faith, they work to change systems and structures as well as to transform consciousness. As they engage in social analysis and theological reflection there is a growing awareness that the systems that cause injustice are increasingly more interconnected and complex. There is a desire to effect systemic change but too often the successes addressed incremental changes within the system. While falling short of their desire, their work has achieved more just and compassionate policies which often mitigated a more devastating effect. But the frustration grows, as their experience with the disenfranchised, refugees, environmental destruction, and global poverty demands much more radical responses. These are responses that go to the root of the unjust structures and that call for the transformation of culture and consciousness. In addition, many are acknowledging that how we have been going about the work of justice has failed to touch into the hearts of the average person. There is a growing sense that they desire and need to renew their own passion for the Gospel vision of justice and peace.

Within the ecclesial arena women, and especially women religious and their elected leadership work to engage the institutional church in dialogue about the pressing issues arising from their experience. The Vatican, although existing within the world shaped by the Enlightenment, continues to operate out of an earlier worldview, which values monarchy, patriarchy, and hierarchy. US women religious, having taken the church mandated renewal following the Second Vatican Council seriously, involved themselves in their culture and in the social movements of their time. They have experienced a richness, a wisdom, and a deepened spirituality as they minister as women to the disenfranchised in our church as well as our world. They desire dialogue with the representatives of the institutional church in a posture of mutual collaboration so as to influence and enrich the church both parties love. As they continue to meet with resistance there is a growing realization that their respective worldviews and belief systems are clashing.

In societal and ecclesial arenas, these leaders are experiencing situations of impasse, of powerlessness, as they continue their work of transformation. They realize that all the ways they know for achieving dialogue, effecting change and influencing others are not enough. They believe that our current constructs of thought are incapable of addressing these colliding forces in a way necessary for the survival of our planet. They believe that we must engage all our ways of knowing including one open to the power of God.

Impasse and Contemplation
The contemplative experience and the language of the mystics challenge our US society and our institutional church. For they move us beyond the constructs of knowing which bias the either/or approach and the use of knowledge to maintain power. Rather, they engage us in a more participatory way of knowing and loving. The contemplative experience speaks to the differentiated unity of the entire cosmos. It reveals the interconnection of all which as FitzGerald states “serves as a mystical basis for an intimate and compassionate human presence to other humans, to the earth, and to all living things.” The contemplative experience is a transformational experience. As FitzGerald states “it experiences a God…who is able to sustain this cultural death and new synthesis and give life and meaning to them.”

The contemplative experience offers another way of entering the breakdown of societal structures and dominant worldviews. In FitzGerald’s view it invites us to enter the pain and powerlessness of the impasse as an experience of societal, ecclesial, or planetary dark night as understood by the Spanish mystic, John of the Cross. We do so believing that God is profoundly present in the darkness and futility of the impasse and thus open ourselves to the divine energy that yields the possibility of new imagination and a new way of being and acting.

Communal Contemplative Dialogue
The intuition behind ICCD is that the nature and urgency of our current situation calls us beyond individual contemplation to engage the impasse through communal contemplation and dialogue. To do so reflects a trust in God that if we come together, create the sacred space and hold it open, something will happen. It is a renewed trust in the Scripture’s claim that whenever two or more are gathered God is present (Matt.18: 20). To courageously engage the impasse together through contemplation is a powerful experience in and of itself.

However,  there is another dimension to communal contemplation and that is contemplative dialogue. It is a rare occasion when we engage one another in true dialogue. Often, discussions too quickly take the shape of debate, advocacy, or strategizing, leaving no time to unmask the deeper issues or release new imaginative ways of responding. The possibility of exploring, shaping, coming to new insights is truncated in an urgency to move forward and achieve our goals. There needs to be space and time to enter into conversation in a way that opens us up to hear and be changed by the discussion.  The experiences of impasse are engaged through the rhythm of communal contemplation and contemplative dialogue, believing that in doing so we allow the possibility of awakening our God-given creativity to imagine and move us to act in new and profound ways.

Context of the INSTITUTE

It is within this larger context that the Institute for Communal Contemplation and Dialogue (ICCD) was founded. The leaders who participate in these circles, predominately of US origin and Catholic tradition, have worked to effect significant change within ecclesial and societal arenas. They are rooted in the teachings of the Second Vatican Council, especially Gaudium et Spes, as well as the 1972 Bishop’s Synod statement on justice. This statement clearly proclaimed that action on behalf of justice and the transformation of the world are constitutive

© 2002-2019 Institute for Communal Contemplation and Dialogue