Musings for the Moment
May 2022

Spring is coming rather slowly here in the Midwest. The flowers beginning to push through the earth still face the possibility of freezing. One realizes how much patience is needed as well as faith in the slow process of transformation from dormancy to aliveness. We are all involved in such a process of transformation of ourselves and of our world. With the situation in Eastern Europe, we are catapulted into even greater chaos wondering what is happening and why and what can I/we do?  Our hope in the future requires of us patience and faith.

Two programs offered by the Institute for Communal Contemplation and Dialogue this June can help us to live in this time from a contemplative heart.

The first is Enter the Chaos: Engage the Differences to Make a Difference which we are offering this year on June 10-12 and December 2-4, both on ZOOM. It offers a context within which to understand why this is a time of chaos and how the transformative power of contemplation can assist us to respond to each other from love and not fear. Click HERE for more information.

I would ask you to help us get the word out to your family, friends, members of your congregation, organizations, and parishes. Below is an ad you can send to them, put in a bulletin or post on social media (Instructions for using: Right-click on the image; 2) Left-click on copy Image; 3) Select email or document and left-click; 4) Right-click on paste; 5) Include with ad website address: iccdinstitute.org.) Please click on ad for more information. 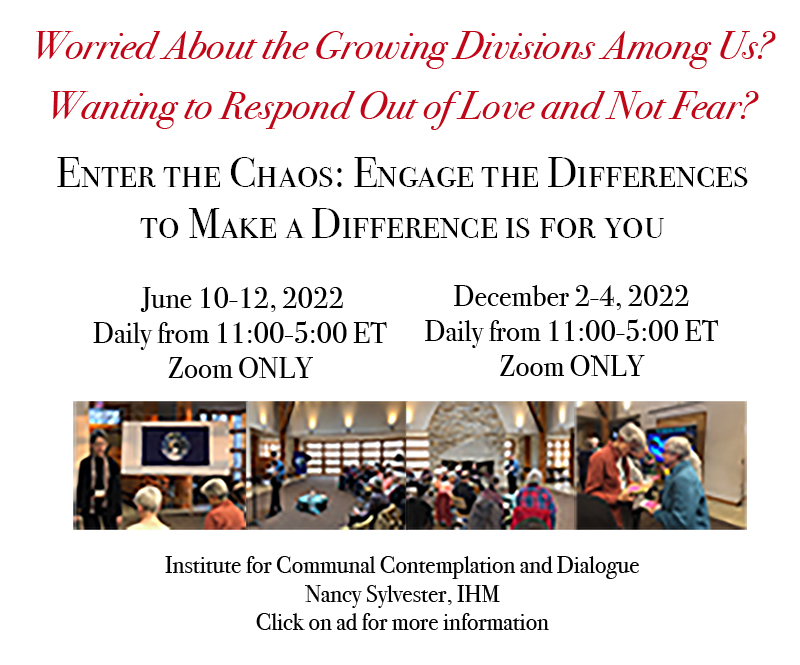 The second program is the ICCDAlive! on Monday, June 6 from 1:00-2:00 PM ET on Contemplative Dialogue. Take less than a minute to listen to what it will be about and why it is important. Please invite others as well.

As we ask what can I/we do, let us ponder the power and the urgency of our saying “Yes” to the many situations that invite us to
respond from the depths of our being—to respond from Christ consciousness. 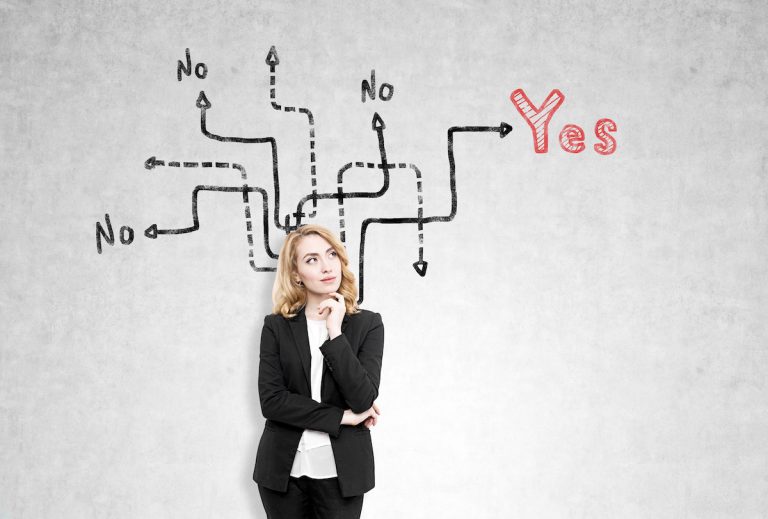 The Future Needs Us to Say ‘Yes’

Recently at community prayer we reflected on the Annunciation. One of the readings included the line: “Mary could have said ‘No.’

“That line wouldn’t leave me. It captured my imagination. I wondered how many other potential Marys were offered the same invitation and had to say “No.” What would have happened if no one said “Yes”? How different would our evolutionary journey be?

Mary’s “Yes” enabled Jesus’ “Yes.” On the cross, seemingly abandoned by his Abba God, Jesus from the depths of his being repeats her assent “be it done to me according to your will.” A “Yes” that reverberated throughout the universe and shifted the evolutionary trajectory toward Love.

And Jesus could have said “No.”

Both Mary and Jesus were facing impossible situations. Mary, an unwed mother, is with child. Not the proper pedigree for someone who would be asked to bear and raise the chosen one of God. I’m sure she struggled, as any woman would, finding herself in such a situation with the feelings of guilt and shame. How would she afford to care for him? Where would she get support? What does it mean for her own life?

Jesus, too, having tried to live his life faithful to the spirit within him, faces arrest, torture and crucifixion — the ignominious death of a common criminal. How much easier would it have been to answer Pilate in ways that would have freed him. Feelings of failure must have flooded him as his closest friends deserted him at this critical time. Questions any one of us would have asked were probably his: Was it worth it? What did I do wrong? How could I have let so many people down? Those feelings of abandonment deepened when he cried out, “God, my God why have you forsaken me?”

Mary and Jesus could have said “No,” but they said “Yes.”

Their “Yes” continues to reverberate and emerges in each of us, as does our freedom to say “No.”

I began to reflect on when we say “No” to the invitations of the Spirit. How do we know when such invitations are offered?

A good place to start is by becoming aware. Aware of what is going on around us and in us — the worldview through which we see things. Alert to the subtle shifts within our body. To realize that “sensing” is another way of knowing, complementing thinking and feeling.

Contemplative practice helps us do just that. Allowing oneself to become present to the moment helps to silence the extraneous noises within and outside us. We drop down and into the spaciousness where Divine Love dwells.

The invitations that seek our “Yes,” our fiat, come from that deep center of ourselves.

Contemplation silences our fears, our should/woulds/coulds, our blame and shame. It continues to invite us to become our True Self, our most authentic self. Over time it invites us to put on the mind of Christ, to be compassion, love, mercy and forgiveness as we engage the world and those around us.

Sometimes those invitations are less than dramatic. It might be a call to be less judgmental with the people you live with and your family. Or to refrain from telling someone how to do things better — the way you would. Perhaps it is being a bit more generous with your time and doing something extra for someone even when you feel as if you have no time.

Being aware of the subtle shift from one’s regular responses and behaviors to those more reflective of one’s truest self-strengthens us to continue saying “Yes” when more difficult invitations arise in us.

Living in this time of chaos brings forth multiple situations that invite us to respond out of the depths of our being — to respond from Christ’s consciousness.

Invitations come to us:

We hear these invitations when we are alert to the “still small voice” within. Ignoring these invitations is saying “No.” G.K. Chesterton wrote: “The Christian ideal has not been tried and found wanting. It has been found difficult; and left untried.”

Through the centuries the Sprit’s quiet invitations have not always been heard. The evolutionary process is moving through destruction to creativity. Our “Yes” is part of this emergence. Each of us is needed more than ever to respond from our True Self as Mary and Jesus did. The future needs our “Yes.”

Celebrate ICCD's 3rd Decade with a Gift
Scroll to Top