Metaphor of the Snail 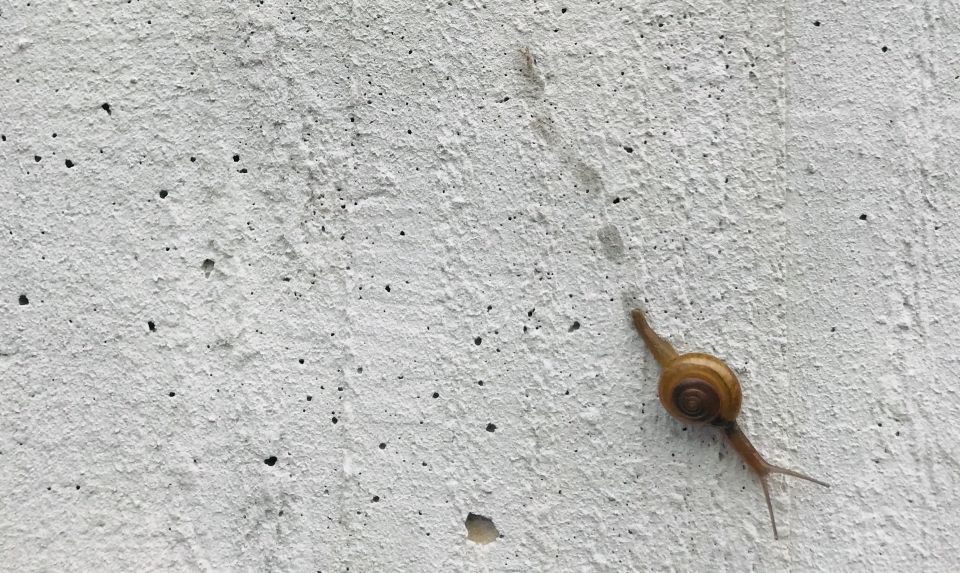 As you continue to read and study the themes that are being addressed in this section there are lots of words. However, a metaphor came to me after one of the Enter the Chaos programs that seemed to give a more visual sense to what this is all about.

Enjoy seeing the program come alive in the metaphor of the snail!

Here was a snail coming out of a patch of grass. it had to come out of itself to cross over the pavement to the grass on the other side. Its head extended quite far out, lugging its shell behind. On its way to the other side it left a shiny trail, a sign of its presence — an acknowledgment that this snail was here and made an impression.

The snail is an earlier stage of evolutionary emergence. But we share the evolutionary journey with all those who came before and those yet to come. We live and exist in environments, in cultures, on lands that seem to fit each for the time. Throughout our 13.8-billion-year history the containers of our unfolding have changed radically and incrementally.

We have emerged from stardust; been warmed by the sun; frozen by glaciers; nourished in the oceans; have risked coming onto land; breathed in air; lived as tribes; gathered in villages; built cities; formed governments; wrote poetry; sang songs; created rituals; praised deities …

And like the shell on the snail’s back, all of that is carried with us. Some parts of it more consciously than other parts. We have on our back the years of how evolution unfolded. We have been shaped by it and we continue to shape it. We all have our patch of grass that feeds us; that makes us comfortable; that provides the perspective from which we view the rest of our world.

Too often we stay in that place. We believe we have all that we need. We gaze beyond our boundaries either judging that we are in a better, safer place or we are curious and wonder about what may be out there.

This day the snail began to move forward, outward. Sticking its neck out, extending way beyond its house on its back, it left the soft grass and experienced a rather strange sensation — concrete pavement.

As we journey in our life there are times when we stick our neck out. We are curious about the things that are not so familiar to us. We begin to move forward and outward far beyond the safety of our home. We wonder about how things are from different perspectives. We, too, experience a strange sensation when we begin to see things from the perspective of others.

Of course, the snail does this slowly. It does not move fast. It takes its time sensing everything around it as it journeys forward.

Contemplation is a form of prayer that invites us to take it slowly. To become aware of oneself and of all that is around us. It invites us to enter a spaciousness that is far more than what we experience in our hectic, rational, “me” focused life. It is within that space that we begin to move; extending our necks, risking seeing more fully what is around us. Here we can encounter others who may be at a different stage in the evolutionary process.

We often think of evolution as physical or biological. Today, many believe that the next stage of evolution is at the level of consciousness. Moving forward necessitates a moving inward so as to enter the deep mystery of the Divine. In doing so we become free to embrace all that has gone before and what is still to come.

Like the snail we begin to make the crossing to the other side.

That evolutionary journey through the stages of consciousness is what spiral dynamics integral helps us with. We begin to see an evolution of thought that parallels the way that humans have evolved related to how and where they lived, to the material conditions of their lives.

All these different stages are alive in us and among us. Like biological evolution we are more or less aware of these different worldviews and perspectives from which we have emerged. The polarities we experience today reflect the dissonance that happens when people at different stages approach issues in a state of almost unconscious awareness. We have to — like the snail — risk sticking our neck out. We want to enter the middle and create new conditions for us to converse about what is important to us.

The snail I encountered was not at the “other side.” It was still in the middle and it left its mark from where it came.

We, too, are not necessarily getting to the “other side” nor accomplishing an outcome that we’ve set for ourselves. Our moving forward is enough, for it begins to create the container from which we the future unfolds.

And like the snail, we will leave our footprints … whatever we do is part of the unfolding … the transformative process of contemplation invites us to the next stage of emergence, which has the potential to embrace all the earlier stages and to create new pathways forward.

Maybe I just may respond to the question, “What is Enter the Chaos: Engage the Differences to Make a Difference all about?” by having the questioner consider the snail!