As President Donald Trump begins to roll out in rapid fire the many executive orders seeking to overturn decisions not only of the Obama Administration but programs and policies that have been in place for decades, I find myself seeking to understand the larger picture. Taking a long loving look at all that is going on is not easy. I know I have more to ponder, and this has made a focus for this reflection difficult.

Yet I found myself reflecting on being a cosmic sentry (Global Sisters ReportNovember and January reflections) and honing in on the “cosmic.” Not in terms of “out of this world” but rather becoming a lightning rod for divine compassion. In this reflection, I want to share with you some of the “lightning rods” I encountered during a January visit to Tucson, Arizona. They caused me to pause, to see things in a new light, and they filled me with compassion and hope.

In Tucson, I attended a session of Cynthia Bourgeault’s Wisdom School, which had as its focus the thought of Pierre Teilhard de Chardin. Cynthia, together with Ilia Delio, explored the thought of this incredible scientist priest, whose insights regarding evolution have influenced the work of all who reflect on the origins of our universe with the eyes of faith. About 80 of us gathered to deepen our understanding and to take hope in a man who wrote of how we as the human species are evolving toward greater love and compassion — and who never gave up hope.

Two of my cousins live in Tucson. One is the executive director of a charitable organization, The Blessed Nuno Society, dedicated to prayer and doing works of charity. Agua Prieta, Sonora Mexico, a border town across from Douglas, Arizona, is the city in which they support an orphanage, rehab centers and an outreach program to a number of barrios. He took me with him for a day. I had wanted to go to the border because the last time I was there was “pre-fence” and “pre-wall.” As we drove the two hours through the desert terrain, I thought about how all of this land originally belonged to Mexico. The border crossing there is congested, yet we didn’t have any trouble going through. As I looked at the fence which is to be this ominous sign to keep people out, I found myself smiling at all the brightly colored murals greeting me on the Mexican side. 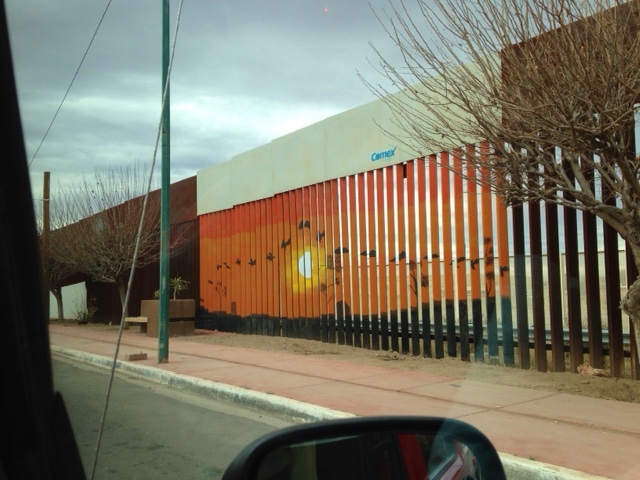 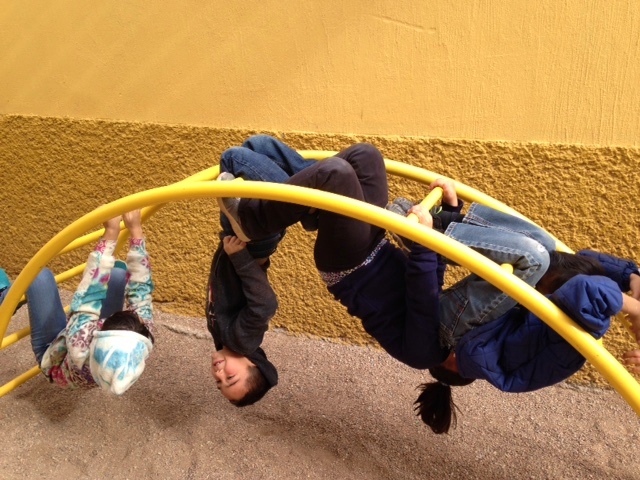 We visited the orphanage and a free day care center. We distributed toothbrushes and toothpaste to students at three different schools. The female administrator has worked more than 24 years in this town and knew what was needed where. A man who belonged to the organization accompanied us on our trip. He had just come into town and wanted to visit. I was struck that these acts of charity were serving as a way to bring middle-class U.S. citizens across the border, inviting them to see those on the other side with love and respect.

Susan Hillman deAlban, a nurse who works the night shift in a hospital in Tucson, also accompanied us to the border. She had spent years working in Mindo, Ecuador, and had put together a book of poems (My Little Angels) written by students. I found in these poems a lesson about how even in the midst of suffering there is hope.

Here is one poem by “MP:

Today my mind is empty of beautiful memories,
It’s full of difficult moments that are hard to talk about.
I just want to think about what someone told me today —
That God, your God, is here in every person’s heart,
That He doesn’t abandon me and He won’t leave my side.
I want to keep in mind that my God will never betray me.
No matter what I do, He always accompanies me in spite of how my attitude is all day.
He gets me up in the morning with a smile.
Even with all that sadness I thank You, my God, for being so good to me and loving me
In spite of each of my mistakes.
Tonight, I’ll sleep well knowing that tomorrow Your smile will fill my heart, and as I fall asleep
I’ll softly whisper Thank You, my God.

My other cousin is very active in the Democratic Party, and so I accompanied him to the Democratic Party meeting of Pima County. There to a packed house the party chair reminded people how they had to get involved locally, becoming precinct captains and assisting their local communities in their various efforts. There is a need to begin to talk with people in their neighborhoods and to those who think differently than they do. It’s Civics 101 — so much of what I did at NETWORK — and the realization is that this is exactly what needs to be done.

As a cosmic sentry, when you become a lightning rod for divine compassion you draw down the energy and send it around the planet. How fitting it was that on the last day of my trip, as I was enjoying the Saguaro National Forest East, a double rainbow appeared as vibrant and as complete as I have ever seen. It delighted me and spoke to me of a future that is waiting to appear. 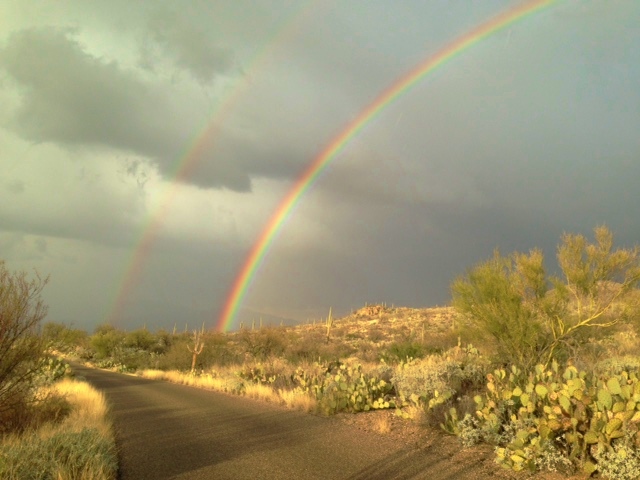 I invite you to find those who are the “lightning rods” for you in your life. The people whom you encounter and will help you make sense of where we are going as a nation and how we need to respond.