Cosmology and Christianity: Invitation or Impasse 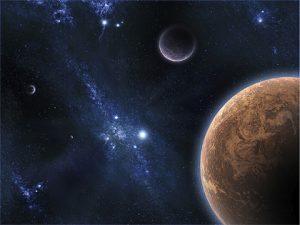 “Impasse” feels synonymous with “stuck.” Images come to mind: an automobile in a snow mound with its tires spinning on the frozen mass, only making the situation more intractable; a gerbil franticly racing on the wheel in its cage, while in reality going nowhere. In both instances purposeful movement leading to an end or goal escapes every effort. Journey on the other hand, conjures up images of adventure, rewarding discovery, even leisurely exploration.

These antithetical concepts come to mind as I reflect back over years of experience—my own and so many others–in trying to come to grips with the contemporary scientific understanding of the Universe (New Cosmology) in face of life-time allegiances to the Christian story.

After an initial foray into the new understanding of the origin and on-going unfolding of the Universe many have felt assaulted by unanswered questions, creating feelings of fear and confusion. There is of course, almost nothing equal to these feelings for creating situations of impasse. In a matter of seconds we become the snow-bound auto spinning its wheels, or the gerbil running to nowhere. Better to leave it all alone; stay with what we have known, no matter the things that no longer make sense; or, on the other hand, the ever growing desire for greater depths of intimacy with the Divine that just can’t seem to be satisfied. “After all,” the musings continue, “I could end up losing my faith entirely.” Some may go the interior conversation that leads us into the heart of an impasse situation: the perception that the new story of the Universe and the Christian faith are mutually exclusive, implying that a choice must be made between them.

John of the Cross in his work, The Spiritual Canticle, offers an alternative course of action, namely that of “The Journey.” In his own words: “ To the mountains, and to the hills, to where the pure water flows.” The invitation is to one of considered engagement. Move with the unanswered questions, not as in impatiently slamming down the accelerator in sheer frustration at the impacted snow, but rather contemplatively and with sacred curiosity. The unanswered questions may themselves be a pathway into the experience of a more profound encounter with the face of the Divine as revealed in the 13.7 billion year history of the Universe and, consequently, a deeper understanding of the Christian story.

The journey to “Where the pure water flows,” begins with the embrace of one of the tried and true maximums of non-violence: “When presented with two options, always chose the third.” In other words the “either/or” option between the Universe Story and Christian faith is an illusion arising perhaps from fear and uncertainty. Theologian Elizabeth Johnson is helpful here, “The new cosmology offers a new framework within which to consider typical theological questions.” The word “framework” or context is the key to a more expansive understanding. A choice need not be made between the stories, rather doing theology in the context or framework of the Universe story is a help in rediscovering what has long been fundamental to the experience of the knowledge of God, namely, the way into understanding God comes through the Universe. The Universe story, then, does not replace God or the Christian story; rather it is the pathway to fuller understanding.

At first halting, then later giant steps, are taken into the wonders of the cosmos. There is assurance in the words of Georgetown University theologian John Haught who states unequivocally, “There is nothing in Christian faith that should make one afraid of science’s widening and deepening knowledge—the more extended and elaborate our sense of creation becomes, the more we should be able to enlarge our appreciation of the world’s Creator and the scope of Divine purpose and providence.” Journeying now more securely with fears quieted and feet on the solid ground of an expanded context, questions basic to understanding the Christian story surface: how are God, Jesus, Earth, and the human to be embraced? The sheer expanse of the cosmos both in time and space reveal a “God Beyond All Names;” One who is at once both immanent/transcendent; One who continues to pour out the Divine self throughout 13.7 billion years of Universe unfolding. The Christ, whose mission, is still too often explained in terms of cruel and demanding expiation, becomes rather the embodiment of oneness, overcoming all otherness, and linking together forever with confidence, God, the cosmos and humans. Earth, no longer the stage on which we act out life, becomes itself a sacred community integral to life in God; human beings become the ones who are charged with “awaking the deep religious sensitivities need[ed] to guide and energize the cosmological process as it unfolds.”

There is both irony and utter surprise in this journey of seeing through the impasse. That which was looked upon with fear, in fact turns out to be itself the very pathway to deepened awe and wonder before the reality of the Divine. That which was viewed with suspicion in fact turns out to open new ways of understanding the Christ for thoughtful Christian believers of the 21st century.

Perhaps coming to grips with the contemporary scientific understanding of the Universe in the face of life time allegiances to the Christian story was never the impasse at all. Perhaps on the other hand, the impasse was entrapment in fear, confusion, and false choices. Perhaps these dynamics are the real impasse which reappears over and over again in a variety of circumstances. Perhaps the contemplative realization that these factors, whenever they arise, are in truth an invitation to journey, “To the mountains, and to the hills, to where the pure water flows,” is the age-old journey through the impasse.

© 2009-2019 Institute for Communal Contemplation and Dialogu